SAFFiR (Shipboard Autonomous Firefighting Robot) is a firefighter robot with included assistant drone, created under a project of the US military and the University of Virginia that uses emerging technologies of robotics. 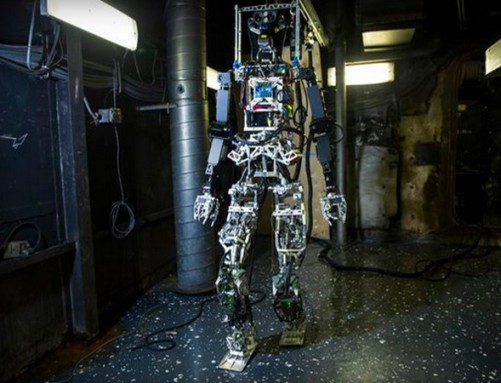 It is a biped robot 70 kilograms and five feet tall, with optimized joints that provide it with a great range of motion to enable it to act in complex places like boats, where it is specializing – walking on irregular surfaces and manage fire hoses.

It is equipped with sensors and cameras that allow you to manage in dense smoke atmospheres but its operation is supported by a DC-21 drone, a small unmanned aircraft equipped with sensors, thermal vision cameras and infrared and that will be responsible for tasks such as scanning and fire detection to indicate to the firefighter robot where it has to go. Also to assess situations by sending it ahead of human team after assessing the information sent to the control room.

It is still early for this Saffir replace human to the firefighters but it is an interesting long-term project to devote as fire support tasks and complex rescue. Imagine an emergency in a chemical plant, refinery of petroleum or central nuclear, bacteriological, toxic or radioactive environments.

The researchers plan to create more advanced designs of this firefighter robot improving its speed and movement, materials for fire resistance and NBC, its computing power, battery or communications.

Although remain under the control of human firefighter, researchers aim to include in next generations of Saffir one artificial intelligence chip for a semi-autonomous humanoid.

Technology is advancing rapidly and robotics is an exciting field of application in the industry. Mention apart for the vision of the writer and engineer expert in Cybernetics, George Zarkadakis, ensuring that in 30 years robots will play among themselves and also with humans, in order to obtain a genetically superior offspring through a “hybrid species”.