There are crazy ideas in the world of technology and I think today we have taken one of those that is that fine line between genius and rarity. Cronzy is the first intelligent pen that lets you choose what color you want to paint. But it is not a pen that has several colors, but uses a base color to create a mixture of between 16 million possible colors. 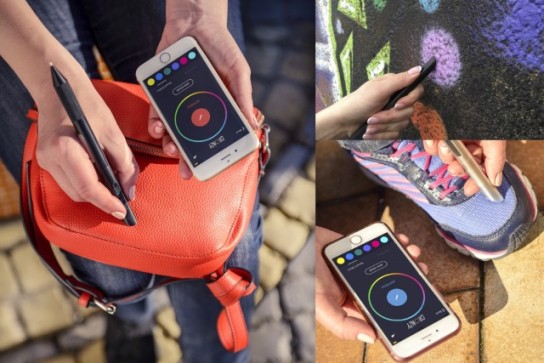 In essence this pen has four colors in its interior, the three sides: yellow, magenta and cyan, plus black. With a small scanner that has at one end, it can detect the color to which you are pointing, either on a screen, on a wall or on any surface with a particular color.

The pen connects to a mobile application that allows you to do the final mix of the color that you want to use. So, if you just want to use that color that you just saw, you can give the OK so that the pen begins injecting this mixture. But you can also modify it or mix it with other colors, and then save it to your favorites.

According to the history of its creators, this product has been in development since 2014, but now when they begin to seek funds in Indiegogo to create the first versions that they will commercialize. The cheapest edition at Indiegogo costs $139, pretty expensive for a simple pen, but if it works, many professional and amateur design, sure to find a use for a relatively affordable price.

It will include five types of different tips to draw or write, and a cartridge kit including the four inks to replace them.

And yes, it includes battery, therefore it is another product that you will need to recharge and that is connected to your mobile with Bluetooth. Say that it is one of those objects that nobody thought could be made “smart” and connected, but the imagination of people shows us that we were wrong.

If you are interested Cronzy smart pen able to mix colors, you can support the project from $139 in Indiegogo up to $1,999, if you need 10 units.