Domestic projectors have evolved a lot in recent years adding more features, resolution and functions, although basically, they continue to maintain the same technologies to generate the image. In the high ranges, it have LCoS systems such as Sony SXRD equipment or JVC D-ILA for prices above 2,000 euros, so if we do not want to spend a lot we must choose one of the other candidates: LCD or DLP. 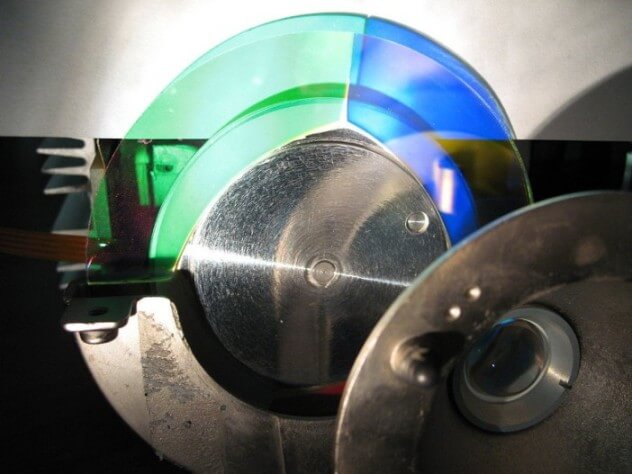 They usually offer cheaper prices and in theory, they are more than enough to start us in the world of projection without spending a fortune, although this is not always the case, or at least not with many DLP-type models. Why? What inconveniences do they have?

DLP (Digital Light Processing) projector technology is chosen by many fans because of its high level of contrast, good brightness, great black quality and shadow detail and great sharpness. In addition, traditionally they have not had the annoying problem of the “grid effect” or visibility of the pixel structure in the form of a grid when we approach the image.

However, there are two fundamental disadvantages of this technology that will make a good part of the users flee: the “rainbow effect” and the difficulties to place the projector in the room if we do not have a space dedicated to that effect.

Mid and low-range DLP models are quite economical, but this decrease in prices means that to generate the different colors use a wheel with constantly rotating color filters. This wheel generally causes some noise and, what is worse, the dreaded rainbow effect that basically consists of flashes with colors on the edge of images that move quickly on the screen. In the following video we can see a somewhat exaggerated example of this effect but that illustrates the problem very well:

Manufacturers can minimize it with tricks like turning the color wheel faster or increasing the number of filters, but the problem is there and if we are sensitive to perceive it, it will bother us a lot and we may even spend time looking for it instead of enjoying the movie.

The other major drawback associated with DLP has to do with the worst ability to adapt the optics to the different conditions of the room. Due to its internal operation, which we can see excellently explained in the following video, it is more complicated to incorporate generous optical zooms and wide lens displacement systems vertically and horizontally into DLP projectors, which makes the ideal point to place the equipment in the room is reduced by losing the flexibility offered by LCD projectors.

So, is it worth buying a DLP projector? It depends. The models of high ranges (1,500 euros up) solve, or rather disguise, these inconveniences remarkably, although if we are sensitive to the rainbow effect (there are people who do not even realize) my recommendation is that we do not bet on a DLP model and let’s go for an LCD or if we can afford one of the LCoS types.