Intel has announced launch of new Broadwell-U processors in CES 2015, the fifth generation of Core processors designed to motorized laptops, Ultrabooks, Chromebooks, 2 in 1, AIOs all in one and mini-PCs. 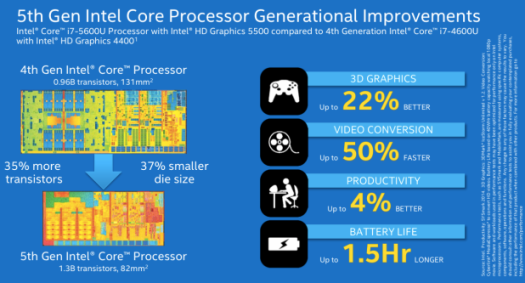 It is the second Broadwell platform to hit the market after the Core M and like this, it is made in technological processes of 14 nanometer (the most advanced in the industry) which allows a significant reduction of chip size, generated heat, noise emission and consumption.

Intel has introduced fourteen different models of Broadwell-U, Core i7, Core i5 and Core i3, as well as Pentium and Celeron models. Ten of them have a TDP of 15 watts with Intel HD Graphics while the other four have a TDP of 28 watts and more powerful Intel Iris Pro graphics.

All Broadwell-U Core models include CPU, GPU and memory controller on the same die, offering two and four-wire cores of processing native with Hyper-Threading and different working frequencies up to 3.4 GHz. It have 3/4 Mbytes of tertiary cache and support LPDDR3L memory up to 1866 MHz.

Intel has put special attention to graphics performance with new generation integrated graphics which according to the processor used the Intel HD 5500, Intel HD 6000 or the most powerful Iris Pro 6100. It support multimedia libraries that Microsoft released in Windows 10, DirectX 12 and others such as OpenGL 4.3 and OpenCL 2.0. It also supports 4K video display with resolutions up to 3840 x 2160 pixels, as well as Intel WiDi technology. Supported formats include: H.265/HEVC and VP8 and VP9.

Intel Broadwell-U is now available and expected a real barrage of products under this platform for all manufacturers.