Certainly it is not so interesting as the holograms in 3D of the Star Wars series, but the project of floating screen that Mitsubishi prepares has very much delight since it appears like a system that allows to project video on the air. 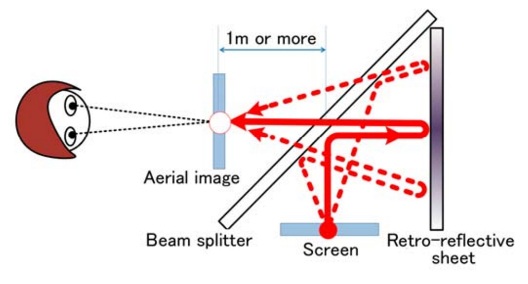 The base that makes it possible to give life to this technology can be seen summarized in the picture, where we found a screen and a beam splitter that divides the photons in reflected and transmitted light, which are directed toward a rear layer that reflects to create the aerial image.

In short, thanks to the convergence of the light will get an image that seems to float in the air. According to initial reports Mitsubishi have developed a special optical simulation program that gets sort the entire set of elements described above, shaping an image up to 56 inch diagonal.

Interesting though that it may be difficult to use correctly, something in which the Japanese company has been thought, and so they have also developed an imaging system that act as a guide, showing the viewer where to look.

At the moment this technology is in development and will not begin to the market until 2020, date in which it will have a few early limited to specific environments, so its landing on the general consumer market would not be a reality until a few years later.