Robohon is a humanoid minirobot that dancing, chat, andalso works as a highly sophisticated mobile which aspires to lead that kind of telephony, has said its creator, Tomotaka Takahashi, also “father” of the first robot “astronaut” whose return to Earth just met one year. 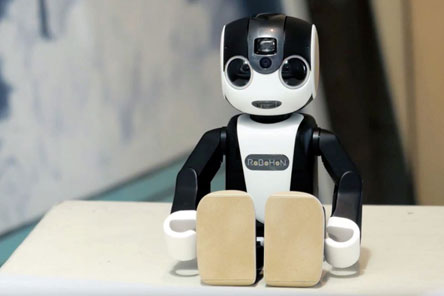 Takahashi has visited this week Madrid to present Robohon, a friendly and chatty pocket-size humanoid robot, which is also a “smart” phone. In about two months could begin to be marketed this device in Japan, added the professor.

Kirobo, the robot of Guinness
In the more than fifteen years of professional experience in the world of robotics, this Japanese engineer has developed more than forty types of robots, almost all humanoids, among which included the famous robot astronaut kirobo.

Launched in 2013 to the International Space Station (ISS) for a stay of a year and a half, this mini android boasts two Guinness World Records: One, if the first robot to accompany astronauts in space, and another, had held talks with humans in the higher elevations.

In the interview, Takahashi has highlighted the great future potential of robotics, accompanied by Robohon, and also by Robi, another small humanoid appearance as a child, although somewhat higher than the previous, which have broken records in number of sales an android, with 150,000 units sold in Japan.

His latest creation, Robohon, is a robot designed as a platform of “hardware” open to new technological developments and applications, whose development has been made in collaboration with technological Sharp, as part of a project that has involved dozens of experts in robotics.

In Europe, at the end of the year
Their leaders seek to revolutionize the classic interface of mobile phones, of which criticize their format, which considered almost obsolete and “unfriendly” when promoting the relationship with the user, said Professor Takahashi.

The engineer, whose work schedules in Madrid included lectures and demonstrations of Robohon in universities and public centers, said that the functionality as a mobile device of its new humanoid robot compete with the most advanced “smart” phones on the market.

According to forecasts this biped robot could be marketed in areas such as Europe or the United States for later this year, depending on the agreements that are reached with the respective telephone operators with already being negotiated.

In addition to walking, moving to different rhythms like a dancer and chat amiably with its owner, this 19.5 centimeters Android and only 390 gram, is equipped with technology of facial recognition and voice to “humanize” their conversations.

Allows calls like any wireless phone and integrates technologies like camera, projector of images or accelerometer, among others. It is equipped with a small touch screen, two inches, to surf the internet and 4G allows connectivity plus Wi – Fi and Bluetooth, while its battery can last around one day, explained professor Takahashi.

On its price he has declined to give figures, but he has advanced to cost about twice the price of a conventional high-end mobile phone. Professor Takahashi has highlighted the sense of “humanity” that transmits Robohon when dialogue, in contrast to the oral responses of conventional mobile phones, whose physical appearance is far from arouse closeness in communication with humans.

For the future, the humanoid robots, with similar in appearance to the people, seems to have a momentous weight because the cities are growing, and tend to raise even more loneliness to populations, immersed as a phenomenon of growing connection with friends from technology, he added.