Transparent interactive screens have already been talking to them over the years, but here is TransWall, a new technology that allows users to interact simultaneously each side of the screen, while seeing through. 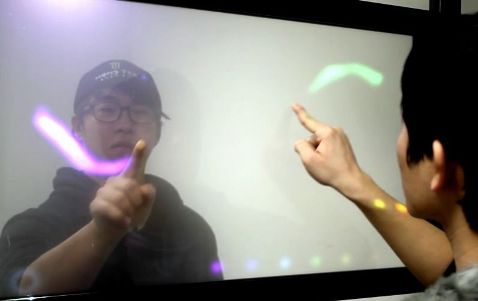 Designed by KAIST (Korea Advanced Institute of Science and Technology) Korean researchers, TransWall is a screen that pushes the concept of transparent screens even further … This touch screen on both sides, is not only capable of displaying digital content, but may also provide haptic vibration feedback to the users.

TransWall comprises two video projectors that broadcast their images on both side of the screen. The display surface is composed of two plexiglass plates between which a holographic film. There are also infrared sensors for touch interactions, microphone, speakers and a computer that coordinates all.

At this stage, TransWall allows users to draw, select objects, to write or to turn the pages of a book as would a simple touchscreen. The screen is transparent, so each user, positioned on either side, seen directly from each other interactions.

We’ll understand, TransWall is a concept that offers a new interactive experience, visual and tactile between two people. In the future, we can imagine this type of screen to find its place in open spaces to work, communicate or just relax while playing.